As the foie gras wars rage on (and on) foie gras opponents who revile the force-feeding of duck and geese simply for their precious livers, have taken their protests seemingly out of some of Manhattan's finest restaurants -- and across the river to the world-famous borough of Brooklyn, N.Y.

Their main target these days, is the Do or Dine restaurant, that happens to have foie gras doughnuts on its menu. Yes, you heard that right...doughnuts. It seems a vegan blogger started a petition titled, somewhat pointedly, "Do or Dine Restaurant: Stop Serving Foie Gras Donuts." It's so far attracted almost 600 signatures, as well as the attention of at least one person's xenophobic tendencies who wrote, "We KNOW this can't be an american [sic] restaurant. Stop this cruelty. Take it back overseas. See what immigrants will do in this country???? This is sickening!" (Okay, don't tell me... Michele Bachmann and the Tea Party movement have a secret anti-foie-gras contingent too. Right?)

In any event, Justin Warner, the restaurant's chef, says that he only serves about 30 doughnuts each week, and that despite the fact that people across the globe are signing the petition, "the one percent of people who are actually coming here and eating them are pretty jazzed." No doubt, fond memories of Krispy Kreme come to...um, never mind.

By the way, and just to be fair (as well as balanced) here's another take on this recent duck liver doughnut scandal:

"Thirty doughnuts a week isn't so much a drop in the bucket when compared with the bottomless ocean of cruelty most restaurants implicitly support with their purchase of commodity meat. But then protesting in front of a Popeye's isn't quite as sexy as screaming at Thomas Keller or David Chang or even some guy in Brooklyn -and certainly not as likely to attract attention."

Also, a new counter-petition from Arielle Norman, Please Keep Serving Foie Gras Donuts, currently has 99 signatures, and claims it would be cruel "to stop making [the doughnuts] several times a day -- before I have a chance to come and try them."

Anyway, from what I'm hearing, they're on the menu over at the Do or Dine Restaurant in Bedford-Stuyvesant, Brooklyn for around $11.99 each. 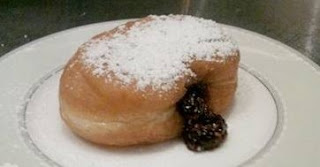 Soon, if it smells like fried chicken on your flight, it's most likely not coming from the complimentary in-flight meals they're serving -- but from the plane's jet fuel supply.

In a giant nod to the growing recycled fuel industry, Air France-KLM has announced that it will start flying planes in September using a blend of kerosene and used cooking oil. More than 200 flights between Paris and Amsterdam will be the first to embrace the alternative fuel.

"In November 2009 we demonstrated that it was technically possible to fly on biokerosene," said KLM's managing director Camiel Eurlings. "Now, a year and a half after our first demonstration flight on Camelina, a new phase has been entered around the world, that of certification. Authorization will soon be granted to operate commercial flights on biofuel."

But it's important to note, that the use of used cooking oil in no way compromises the safety of an aircraft. Dynamic Fuels, which produces the renewable diesel, refines the used cooking oil so that it meets precisely the same technical specifications as traditional kerosene. One of the cost-saving benefits to the airline is that its planes require absolutely no modification to adapt to the new fuel.

Now, if they could only bring back some of the real food that used to be included in the price of an air ticket....
Posted by H.G. Dowdell at 8:42 AM 1 comment: