It's probably true that after you complete a world tour, sell a few million records, or take a few walks on the Red Carpet, the obvious next step would seem to be putting your face on a condiment for burritos, burgers, pancakes, panninis, etc.

That said, here are some of the most: Ridiculous Celebrity Food Endorsements… ever. And I guess once you see products like Hulk Hogan's "Hulkster Cheeseburgers," you really can't think of him -- without picturing a big ol' frozen meat patty first. (There's a pun in there somewhere…I just know there is.)

Or perhaps, Danny DeVito (pictured above) hawking Limoncello liqueur, guaranteeing you'll be plastered and bash George W. Bush every time you make an appearance on ABC's The View. (Loved how Joy Behar outed Danny's partying the night before with George Clooney in that episode!)

And in case you never saw that episode of a slightly "impaired" Danny DeVito on The View, here it is (he even briefly mentions his Limoncello pitch product here): 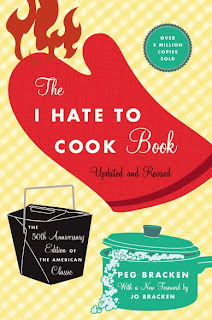 Fifty years after the original publication of The I Hate to Cook Book, it's been updated, revised, and re-released this summer (pictured here), with its publisher hoping to find a new generation of homemakers who appreciate the Kraft cheese, Campbell soup and "alcohol included" recipes that made it beloved among millions of rebellious housewives in the 1960s and 1970s.

It's also interesting to note that the original 184-recipe book, by Peg Bracken, was way ahead of its time, even though it was written with a premise that was then considered downright sacrilege. Bracken simply contended that cooking is not as joyful as the women in TV commercials standing in front of a hot stove in high heels and pearls made it look, and that it should be done as quickly as possible, preferably with ingredients that were already in the cupboard.

This also made the original book itself somewhat revolutionary in its time, ranking way up there with other 1960s "rebelliousness" like birth control pills and public bra burning. Oh, we women were mischievous "scamps" back in those days, weren't we? 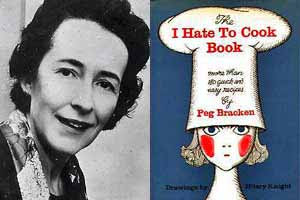 Meanwhile, go on out and grab a copy of this re-release. It's definitely a classic bookshelf keeper.

Big Mac, With A Side Order Of Zocor

A new UK study (although probably one of dumbest ones I've heard to date) would like to offer you a pill, with your next McDonalds' order. It calls for fast food joints to distribute (for free) the cholesterol-lowering drugs called statins, taken by 24 million Americans to prevent heart disease and strokes, to offset the effects of a fatty meal. In other words: Want a little Lipitor to go with that shake?

The researchers, at Imperial College London, concluded that the cardiovascular toll of a daily meal consisting of a Quarter Pounder with cheese and a small milkshake would be neutralized by a statin pill served as a side order. The findings of the clinical trial, which involved 43,000 participants, will be published Sunday in the American Journal of Cardiology. "In terms of your likelihood of having a heart attack, taking a statin can reduce your risk to more or less the same degree as a fast-food meal increases it," a lead researcher told reporters. And providing the pills would cost less than 7 cents per customer, about the same as a packet of ketchup.

But then again, for me, the question would be this: Can they really dispense a drug like this in a fast food joint -- without a doctor's prescription? Because if they can, sounds like very soon British pharmacists will be posting signs in their windows pointing their patrons -- to the nearest Micky D's.

But the seemingly more sensible British Heart Foundation, stresses that the drugs are not a "magic bullet," and recommends exercise and a healthy diet as the best bet for staving off heart problems, in these Reuters reports:

(And no doubt, the shortest answer would be, don't serve your kids these fast food meals at all, opting for some healthier carrots and greens, replacing that shake with fruit or yogurt, or...)

Anyway, read more here about fast food joints dispensing drugs in order to make that Big Mac you just wolfed down more healthful here
Posted by H.G. Dowdell at 7:37 AM No comments:

To promote its new campaign addressing world hunger, 1billionhungry.org, the UN’s Food and Agriculture Administration has chosen actor Jeremy Irons to appear in a video evoking a raging take off on newsman Howard Beale (played by the late Peter Finch pictured above) in the classic 1976 film Network.

The UN campaign is an online petition for governments to address the problem of world hunger. Signatories can track their impact as friends sign up via Facebook and Twitter. And in the promotional video for the petition, Irons urges us in the Network tradition to go to our windows and scream "I'm mad as Hell, and I'm not going to allow 1 billion people to go hungry."

Interesting stuff, as well as nostaligic for many of us.

Check out the video clip here and let your own voice be heard: