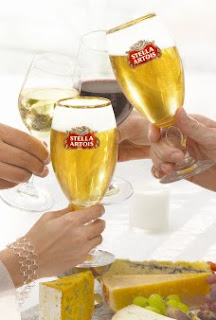 In addition to being one of my favorite drink topics (coming in at a very close second to wine, of course), it seems the creative (and very thoughtful) folks over at Epicurious will soon be launching their new blog called, Holiday Cheers, a winter blog on entertaining with...yep, you guessed it...beer.

Over the next few weeks, they'll be helping you prepare casual gatherings, impromptu dinners, and elegant cocktail parties over the holidays. And along with tips, ideas, and recipes, they'll provide you with information on how to cook with, serve, and enjoy a sudsy cold one during this festive, busy, yet very special time of year.

Thanks, Epicurious. Season's cheer and bottoms up! 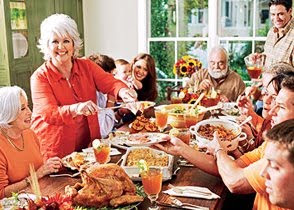 It's that time again, and my favorite "Hey, yawwwl!" drawling, down home girl, Paula Deen (with the aid of her ever supportive hubby, Michael), shows you how to prepare Turducken. So make that all-important trip to the poultry counter at your favorite supermarket for the three main ingredients (that'd be a whole turkey, whole duck, and whole chicken, all gutted and semi-boneless, of course), and watch Paula show you how it's done in this video clip:
Posted by H.G. Dowdell at 2:41 PM 2 comments: 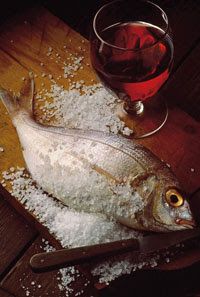 The rather old (yet totally accepted) belief that red wine is not to be paired with seafood is nearly a religious dogma among connoisseurs.

Their reasoning is that the combination usually results in a strong and unpleasant fishy aftertaste. The traditional explanation for the "bad" pairing is based on the presence of tannins—the chemicals that make red wines taste dry and cause the mouth to pucker. Yet, every now and again, a tannin-rich red wine that does go well with seafood turns up. Even though which wines can manage this pairing, and why, has remained a mystery that even the best-trained sommeliers do not understand.

So, a bit "stumped" over this little wine-and-fish quandary yourself? Then trust me, you're not alone. 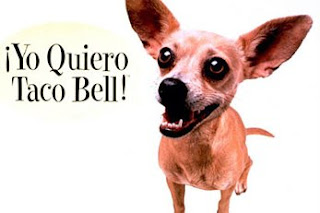 In an interesting opinion column published on CNN's website, Ruben Navarrette Jr. addresses "food racism" relating to a controversial statement made by ESPN sportscaster, Bob Griese, regarding Latino NASCAR driver Juan Pablo Montoya. When fellow analyst Chris Spielman asked where was Montoya, Griese replied he was "out having a taco." And I think this is where I'll also point out that Montoya happens to be of Colombian... (not Mexican) heritage.
Griese has since been suspended by ESPN for one week, as well as having rendered an apology for the remark. And when asked about the comment, Montoya immediately and very succinctly rose above it all, stating: "Somebody mentioned it to me. I don't really care to tell you the truth. Yeah, I don't. I could say that I spent the last three hours eating tacos, but I was actually driving a car."
In any case, watch this following video clip -- and you decide.
Tempest (or in this particular case...taco) in a teapot? Or, are we indeed becoming a nation of cultural "food bigots," as the above opinion column might suggest?
Posted by H.G. Dowdell at 1:41 PM 1 comment: