Cookbook Sales On The Rise 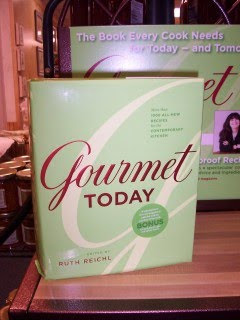 Not only is Ruth Reichl's Gourmet Today selling better than her 2006 Gourmet Cookbook, it seems that interest in both cookbooks have increased dramatically, since news of the shut down of Gourmet Magazine earlier this month.

Could it be the start of a post "foodie magazine" trend? (Sure hope so, cookbook shelf enthusiast... that I am.)

Cook Or Be Cooked By Wii

The Food Network is making a game out of teaching you how to cook.

Coming November 3, 2009 is the Food Network's Cook or Be Cooked video game by Namco for the Nintendo Wii ($39.99, preorder at Amazon ). This new cooking video game offering also appears to be a more "professional" version of the Cooking Mama series of games.

That said, I totally agree that it really couldn't get any cheesier than the obvious train derailment that was Iron Chef America: Supreme Cuisine for Wii. Oh, well. Cookbooks and their hallowed kitchen cookbook shelves...be damned.

In any event, catch a sneak peek at how to: "Flip, chop, slice, and dice your way to the table!" in this nifty (yet also slightly cheesy) Food network Cook Or Be Cooked trailer:

In collaboration with the San Francisco-based wine-making enthusiasts, Crushpad, Twitter is launching its own brand of wine -- for a literary cause.

The wines (pinot noir and chardonnay) will carry the the label "Fledgling Wines," and a portion of proceeds from sales will go to support Room to Read, a literacy organization.

"Because if you can't read you can't Tweet!" say founders Biz Stone & Evan Williams in promoting their philanthropic effort.

Then again, it also begs the question: If I had the "Room to Read" (so to speak), when would I have the time... to Twitter? This, in addition to Twitter's own notable contibutions to literacy, of course, in the forms of: LOL, OMG and How r u tday?

This Sunday's New York Times Magazine "food issue" showcases one of my favorite modern-day fiction authors, Jonathan Safran Foer , on not eating meat, in an excerpt from his upcoming book titled, Eating Animals, which has a scheduled release date in November 2009.

Makes for some truly interesting (as well as reminiscent) reading, especially, how he depicts his grandmother as the family's kitchen "Sentinel" while growing up. Like so many mothers and grandmothers we remember from those years, she was the one who was so consumed by the masterful meal she had created -- that in most cases it had already filled her stomach to the proverbial "brim," so that there was no desire on her part to eat another bite.

Memories.... (Even, if it probably has very little to do with the "key" focus of Foer's new non-fiction book, which explores his own personal eating habits, overall.)

In any event, I'm really looking forward to this new one from Foer, who made me an instant fan with his offbeat and quirky runaway debut novel, Everything Is Illuminated.
Posted by H.G. Dowdell at 10:15 AM No comments: 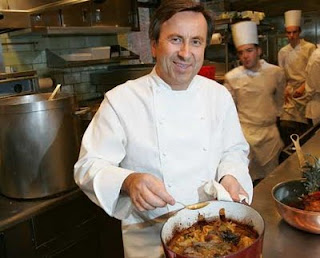 We've all probably had at least one (if not more) emotional memories of some of the most meaningful meals we've ever eaten. And over at Epicurious this week, Editor in chief Tanya Steel interviewed chef Daniel Boulud in the kitchen of their Entertains NYC pop-up event. There, Boulud describes the "emotional" dinners that have impressed him most in his career.
Interesting (as well as heartwarming) stuff. Especially the story of a retiring chef who signed his chef coat and gave it to Boulud as a memento of the event.
Catch a peek at the video clip here
Posted by H.G. Dowdell at 10:03 AM No comments: