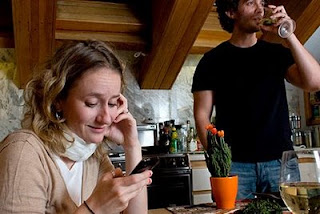 I've seen it, as recently as this past week, when a friend offered me a lift and her two young daughters were text messaging each other -- in the back seat of the car -- seated right next to each other.

But these days, the phenomenon of "texting" has also found its way to family dinner tables, including important holiday meals such as Thanksgiving, Christmas, Easter, breaking the fast on Yom Kippur, Passover -- you name it.

According to Emily Post’s great-granddaughter, Cindy Post Senning, it's called texting anarchy, and "People are texting everywhere," she says.
Husbands, wives, children and dinner guests who would never be so rude as to talk on a phone at the family table seem to think it’s perfectly fine to text (or e-mail, or Twitter) while eating.

But Dr. Post Senning says that it's not perfectly fine. Not at all. So new is the problem that her latest book, Emily Post’s Table Manners for Kids (HarperCollins, 2009), written with Peggy Post, covered it only generally, in a blanket ruling: "Do NOT use your cell phone or any other electronic devices at the table."

Works for me, Cindy.

Oh, this is a rule in our house -- cell phones and texting are frowned upon at the dinner table.