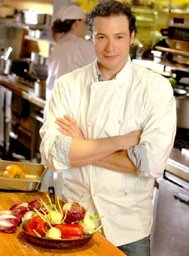 Okay, his appearance on the Awful Plastic Surgery website may not have been the best thing to happen to his career (or anyone's for that matter). But after his failed stint as the host of WOR Radio's Food Talk as well as his short-lived reality TV career and subsequent disputes with NBC's The Restaurant financier Jeffrey Chodorow, he's now being bashed for his appearance and/or endorsement for the Bertolli company, i.e., the gathering of 100 or so "chefs" staging a mock protest against Bertolli brand pasta products, supposedly designed to keep people from eating out.

Come on, folks. As a fellow New Yorker, I say cut this Queens, N.Y. native and one time wunderkind a break here. He was once lauded as one of the most talented young chefs in New York, or, so you once said. Well, then...career setbacks -- or no -- that kind of basic "talent" doesn't just evaporate into the air once you're no longer considered to be the culinary world's "flavor of the month."

In any event, you can read more about it here in this month's New York Magazine .