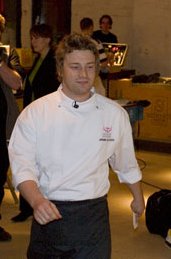 Long before his School Dinners program for the purpose of serving more healthful foods throughout the British School System, was the 2002 documentary aptly title, Jamie's Kitchen . And agreeably, some of the students he pledged to help in this effort, appeared to have the most questionable work habits, leading many to see exactly *why* they were jobless -- in the first place. Still, Jamie Oliver, one of the UK's youngest and brightest master chefs was nonetheless dedicated in giving these 15 young Londoners a chance, as well as an "opportunity of a lifetime" at a full-fledged culinary career. Ultimately, it all became a part of his Fifteen Restaurant charity program, in collaboration with the original London restaurant, of the very same name.

This week, TLC: The Learning Channel is airing this series again, and for me, it still remains a must-see, especially for those who never had the privilege of seeing it the first time.

Clearly, there's a lot of true-to-life food service TV reality... going on here.
Posted by H.G. Dowdell at 10:54 AM