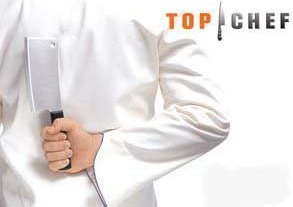 It's back for a second season, hopefully with all the hyped up "back-stabbing" spice that made this show a true keeper in my opinion after last season's successful run. No doubt, even with all its usual "reality TV" spin, a judges panel including executive chef and restauranteur Tom Colicchio still succeed in keeping the show's high drama down to a saner, far less manic medium than its sometimes scream-fest counterpart, the Fox Network's Hell's Kitchen.

Clearly, with Top Chef, the emphasis of the show(at least, it appears to be)is on each chef's ability to perform on his or her best level under pressure, as demonstrated in the random "Quick Fire" challenges -- as opposed to how wide the judges can bug out their eyes for the cameras, or come up with new and inventive ways to foam at the mouth as they smear unfavorable food bits directly down the chef coats of the contestants while publicly berating them. Not at all to say, however, that harsh criticisms don't happen on Top Chef, nor cat claws bared, or that feverish tempers don't fly. Trust me... they do. Big time.

But special kudos to the Bravo Network for bringing this program back for another season, to showcase what behind-the-scenes in a restaurant kitchen would *generally* look like.
Posted by H.G. Dowdell at 6:25 AM