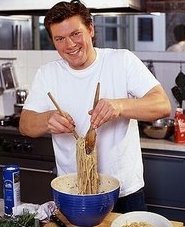 First came the reports of Iron Chef Cat Cora's vow to "take mini-mart foods to a whole 'nother level," by signing on to prepare meals worthy of a five-star rating for the Circle K mini mart chain in Los Angeles. By the way, you can check out more about that, as well as um... chef Cora's ample cleavage here. (Er, Cat? Is that really...you?)

And now, Food Network chef and TV host, Tyler Florence, has done some teaming up of his own with the Applebee's chain to "inject a youthful flair into an already outstanding menu." This meaning that the restaurant primarily known for its family fare, is now hoping to attract diners from a slightly different segment of the population.

The match up is said to be totally designed and geared toward -- yes, you guessed it -- a "younger" audience of less experienced cooks, which has been Florence's real focus since his highly popular TV shows, Food 911 and How To Boil Water. Florence is also currently featured in the chain's ads, along with his photo on their menus.