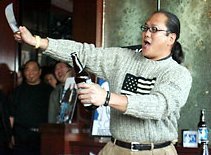 We've seen him battle it out on both the 1990s Japanese version of Iron Chef as well as its un-dubbed spin off, Iron Chef America on the Food Network channel. And now, Iron Chef Masaharu Morimoto will soon be launching his first book titled simply, "Morimoto." The fully illustrated book will serve as an in-depth look at the chef’s personal culinary journey and his philosophy of Japanese cuisine, including 120 recipes.

Recently, Rogue Ales launched two new namesake beers: Morimoto Hazelnut Ale and Morimoto Soba Ale. Chef Morimoto was on hand in Seattle for the launch and press conference, where he picked up a bottle of the hazelnut ale in one hand and a large custom-made knife in the other. He spoke a few words in Japanese, then lopped the head off the bottle -- after the second try (pictured above). He chanted "Let's Go, Mariners!" and then autographed a few bottles of beer for those in attendance. Read more here about how Morimoto, an apparent Seattle Mariners enthusiast was also scheduled to throw out the first pitch at a game the following day against er, well…the New York Yankees.

In any event, best wishes for going all the way with your new book, Chef Morimoto. The book by DK Publishing is scheduled to hit bookstore shelves by September 2007.