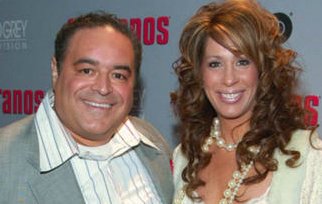 Joe Gannascoli, and his wife, Diana, at the 2006 HBO Sopranos premiere at MOMA (Museum of Modern Art) in NYC.

For those of you who follow the HBO series, The Sopranos as religiously as I do, you've no doubt been following the tale of woe surrounding wise guy Vito Spatafore , played by NY chef and actor, Joe Gannascoli. Needless to say, a few seasons ago when Vito fired the bullet that killed the son of former family boss, Jackie Aprile, Sr., no one would have thought to look beyond Vito's cold-blooded side -- for a much more hidden and guarded one. But sure enough, this season, we all got to see Vito finally come out as a gay hit man. And last week, we also got to see Vito's culinary skills while preparing a meal for his new love interest, Jim, after tasting Jim's "Johnny Cakes" at a local New England diner. (Note: If you're a regular viewer you'll already know that I am, in fact, speaking about the kind of cakes you pat with butter and syrup for a while, and then eat... oh, never mind!). Of course, way up north in New Hampshire is where Vito chose to stay in hiding for a week or two after being outed to his fellow crewmembers back in New Jersey.

However, in real life Gannascoli is indeed a chef, who has been in the restaurant business for years. In addition, he's the former owner of a Brooklyn restaurant called Soup As Art (I was really surprised to learn that the restaurant has been sold). And now, he's also the author of a recent culinary crime novel titled A Meal To Die For , that is one of the most deliciously entertaining novels I've read in a while. Trust me, you'd better eat something before reading this one -- otherwise you'll be famished from all the mouth-watering recipes and food references by the time you're finished.

A Meal To Die For is a fantastic read, and I highly recommend it.

By the way, I hear Joe's To Die For pasta sauces have been popping up in gourmet shops and delis all over Long Island, N.Y. Also, look for Joe's olive oil, barbecue sauce, and salsa, along with a brand new line of red and white wines -- coming soon.

I'll definitely be keeping my eyes open for a few jars of the pasta sauce on a trip I'm making out to Nassau County, Long Island in a few days, so wish me luck.

Way to go, Joe. And don't make us wait too long for your next book!