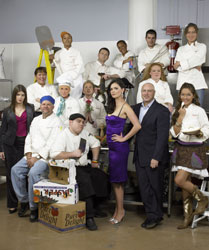 Katie Lee Joel and the contestants of Top Chef

This is one reality show that really began to grow on me after a while, so I'm glad to learn that Top Chef is being picked up by the Bravo network for a second season with food writer and Hamptons Magazine contributing editor, Katie Lee Joel remaining as host. By the way, that name sound familiar? Well, in case I haven't mentioned it before, Katie Lee is also the wife of the Piano Man, Billy Joel.

In any event, I'm not so sure if I'll be tuning in tonight for the Top Chef "Reunion" extension of Season One, where booted contestants come back for a one-hour show, primarily to tell each other what they really think of their cooking, their egos, what a back-stabbing, sneaky, double-crossing biatch...um, well, you get the picture. As far as the whole reality TV "I know you are but what am I?" claws and catfight thing goes -- thanks, but then again... "no thanks."

And since we're almost down to the Final 3 Showdown in Las Vegas to decide the winner for Season One, I'll throw in my best wishes behind finalist Dave Martin . Throughout the competition, for me, his sincerity for the dishes he prepared as well as his profession were always A-plus and outstanding.

Still, it's anyone's guess for the victor at the final face-off on May 24th. So best of luck to all!