Down To The Final Two 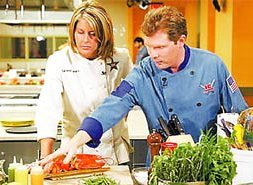 With only a few seconds to be officially out-the-door this morning and on my way, I'll just give that long overdue mention to this year's Next Food Network Star competition. Even though for me, last year's battle for the coveted title was slightly more interesting, this year found me totally liking San Diego native and graduate of Le Cordon Bleu, Carissa Seward for the big win. And just for the record, there's no high and mighty culinary issue going on here, regardless of Carissa's time spent at the prestigious institution. She very openly states that watching her mom while growing up, and tooling around in her own kitchen (and sometimes "screwing up") were her greatest inspirations.

But now that Carissa has been eliminated, and I must add, after preparing the most delectable-looking set of dish presentations at the CBS Early Show challenge (yes, I think this counts just as much as how well one can schmooze up a morning show host with a lot of empty chatter over the grill pans), I really think it could go either way for the remaining two contestants, Reggie Southerland from Los Angeles and Guy Fieri from Santa Rosa, California.

Meanwhile, if you don't already know that much about her, them -- or the competition itself, of which the prize is the winner's very own Food Network cooking showcase starting in June 2006, read more about it here. Quickly adding to that, the season finale and announcement of the winner happens this Sunday, April 23rd at 9PM EST.

Keep on rocking, Carissa -- and best of luck! I'm sure that from what many have seen, the only way for you, is upward.