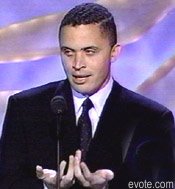 While trying to steer clear of the kind of polemics that can sometimes even be a "good thing" when kept in its rightful place and context, regarding the recent flap over the daily operations of six of our U.S. ports being turned over to Dubai Ports World in the United Arab Emirates (mind you, two of those ports being right here in my very own September 11th backyard of New York City), I'm in firm agreement with the recent sentiments of Rep. Harold Ford, Jr. of Tennessee. Congressman Ford unequivocally states: "A nation's government is as good as its ability to defend, fund and take care of itself. By that metric, the United States is not measuring up."

And by this, I think the good congressman has hit the nail squarely on the head. With a reported 80% of terminal leases on the West Coast being overseen by companies based outside the U.S. -- and for years -- needless to say, we haven't been measuring up for quite some time on this particular issue.

The UAE, while helpful in the fight against terrorism today, still does not recognize Israel, was home to two of the 9/11 hijackers and was one of only three nations in the world to recognize formally the Taliban. Need anyone really say more????

As Congressman Ford has also stated: "We outsource the job of supplying our homes and businesses with energy by importing 12.5 million barrels of oil every day. We outsource the job of providing our nation with the capital it needs to drive innovation and provide basic social services by borrowing $615,000 every minute, much of it from countries who do not see the world as we do. Now, with news of the Bush administration's approval of the transfer of operations at ports in New York, New Jersey, Baltimore, Philadelphia, New Orleans and Miami to a state-owned company located in the United Arab Emirates, we are outsourcing the job of keeping our nation's ports secure. At some point, enough is enough."

Clearly, and with all due respect to the Bush Administration, in the final analysis the bottom line is this: He is *dead* wrong on this issue. This is not a Democrat or a Republican issue. This is a security issue. Delaying this deal is simply not good enough.

And yes...I know Congressman Ford is now a full-fledged candidate for the senatorial race in Tennessee. However, I think it's also pretty clear that a New Yorker like me would in no way be of any political help to him come election day. Therefore, now that I've established the obvious fact that I am neither one of his constituents, nor a: VOTE FOR FORD FOR THE US SENATE enthusiast (even though, if I did live in the state of Tennessee -- I'm almost certain that I probably would be), my support of his position on the U.S. port security issue, is solely based on the fact that, for me, the man just makes SENSE.

I am in total agreement. What excellent comments! Everyone here - and I live in an extremely conservative state - is appalled at this sale of our ports and all the risks involved. It is terrifying, the direction in which we are headed. I hope someone like this Ford can run for president next time, so we can get a leader who can turn things around before we completely go under.