In 1979 there were few places you could go without seeing at least one or two people with their noses buried deep in his blockbuster bestseller Kane & Abel.

And now after serving a prison term in his native England for perjury, internationally acclaimed novelist and politician, Jeffrey Archer, has decided to give up on politics -- but hopefully not the business of writing. I, and I'm sure many others who've enjoyed his flair with the pen, would love to see this gifted author come back strong with as many more fascinating stories of K&A caliber, for as long as he's able to do it. Read more about his plans since being released from a two-year sentence in 2003 here. This article also outlines in brief detail what landed him in hot water (and jail) in the first place -- which I won't even bother to go into here. Simply put, Archer has done his time, paid his dues, and now, the only thing I'd want to talk about here -- is what new writing projects he might have in the works.

Come on, Jeffrey, it's been far too long, so don’t let your K&A fans down. Give us more -- and soon.

And for those of you who have never read Kane & Abel or any of Jeffrey Archer's other books, I highly recommend them. The man is a true master of his game when it comes to the art of telling a story.

Just when you think you'd have the option of boycotting the sale of another one of author James Frey's penned offerings, Page Six of the New York Post now reports that Riverhead has decided not to go forward with their announced two-book deal, as confirmed by an unnamed "rep" for Frey. No official word from the publisher has been issued, nor have there been any bulletins from Frey, his former agency Brillstein-Grey, or publisher of a Million Little Pieces Doubleday about plans for donating part of the Oprah windfall somewhere useful and noble -- but there's still a little more than a month to go before that seven-figure royalty check is issued.

Page Six also reports that the red-faced producers of a movie based on the short stories of author J.T. Leroy, have now had to add a disclaimer to their press releases, based on the latest revelation that Leroy -- never really existed. Read more about that here along with the fact that top celebrities such as Courtney Love, Rosario Dawson, Tatum O'Neal and Susan Dey -- *all* claimed they were friends of the made-up teen hooker-turned-author.

In the immortal words of Arsenio Hall: Oh, the things that make you go, "Hmmm..."

Yes, it's that time again, and as it was with Seasons 1-4, I don't mind telling you that once again...I'm hooked.

However, this year I think I'm being slightly more democratic with having 2 personal favorites to win. If you'll recall, last year, for me it was pretty much contestant Bo Bice from beginning to end -- and none other. But, year this I'm proud to say that I've chosen one girl and one boy who both managed to completely blow me away during the auditions and the dreaded "Hollywood Week" prelims. And no, I'm not revealing the names yet until both of them reach the top 12 finalists -- which I'm sure they *both* have a fairly good shot at doing. They're on this group photo though (well, of course they are) of this year's American Idol Top 24

Overall, the girls semi-finalists sounded great last night, with the exception of one (or maybe two) disappointments. By the way...have you ever wondered if Randy, Paula, Simon -- and yeah, sometimes even Ryan Seacrest (all pictured above) -- are hearing the *same* exact performance as we are at home?? In any case, I'll be tuned in for the 12 boys tonight, and see how they measure up.

Again, I don't know how in the world I ever got this hooked on a TV competition show like this... but here I am, five big seasons later.

Check out American Idol tonight, and then again tomorrow night to see overall how America voted.
Posted by H.G. Dowdell at 7:45 AM No comments:

One of my favorite American culinary masters, Cat Cora, president and co-founder of Chefs For Humanity, has accepted the role as nutritional spokesperson for UNICEF, 2006. One of her first missions is a public awareness campaign, which is intended to draw attention to the situation in Malawi and the urgent need for an estimated 2.5 million in additional contributions to UNICEF. You can read more about master chef Cora and these vital efforts here

And in addition to tuning in to watch her kick-butt artistry in the male dominated Kitchen Stadium on Food Network's Iron Chef, soon you'll be able to catch her new book titled, Cooking From The Hip

Jeez...as if this tiny little powerhouse even HAS any hips on that petite framework of hers.

Keep on slicing, dicing, and pushing that culinary envelope, Cat. In short...keep on rocking us, Iron Chef.

Time On The Move

With only so many hours in a day (don't you just love that dusty old expression which really means: "Jeez, what in crap's name have I been doing all this time, to prevent this, that, and the other thing -- from ever getting done??") it looks as if I'll be taking a short hiatus here to get a few projects wrapped and completed once and for all.

So I'll see you back here soon. But before I go, and speaking of "Time,"(okay, just call it a cheesy segue if you must) I'd just like to mention the recent sale at Time Warner Books, and hope that it will also mean some new and exciting imprint houses... for agents to submit our manuscript and proposal gems. (One can only hope.)

In any event, read more here

On this day of big super bowl fun and anticipation, it truly saddens me that we must now also say goodbye to the great writer, activist, and visionary, Betty Friedan. Her book The Feminine Mystique literally changed the way women viewed themselves forever back in the 60s, and today it still remains as a timeless classic.

Friedan stood tall among other feminist greats such as Gloria Steinem and the late congresswomen Shirley Chisholm and Bella Abzug. She was also one of the founders of the association we now know as the National Organization for Women (NOW).

And needless to say, she, too, was one of those people I've always viewed as a door-opener for the advancement of the sometimes forgotten of our society.

She will be missed.

How much does it cost to gain the attention of 90 million Americans and one billion people around the globe?

This of course, is the time-honored question advertisers ask themselves each year when evaluating the purchase of commercial time during America's most watched sporting event.

By the way, here's another question: What company was going to sponsor a pay-per-view football game played by models wearing lingerie? Aw, come on...you know you wanna know.

So find out the answer to these super bowl "big spender" questions and more here on this, the Friday before SUPER BOWL XL.

And for the female sports junkies among us, ladies, don't forget you can brush up on exactly how it's done on Sunday before it all begins with Holly Robinson Peete's must-have primer: 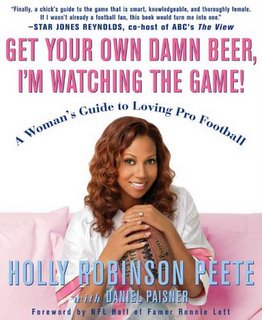 Anyway, here the former star of 21 Jump Street and several other popular TV sitcoms has an insider's view of the game from start to finish. And, who better to know -- given she's married to NFL quarterback Rodney Peete. As a side note, gotta also love the fact that hub still hasn't figured out that I bought this one last year...on his credit card.

Well, I guess he knows now, doesn't he?

In any event, GO STEELERS! and make it a great Super Bowl weekend, all. Peace.
Posted by H.G. Dowdell at 6:35 AM No comments:

In Pursuit Of The Dream

She grew up in rural Alabama, the daughter of one of very few local black businessmen. During that time, she often witnessed the festering hatefulness that bigotry and oppression can generally leave in its wake. However, years later, the experience molded her into a supportive lieutenant to a young, idealistic preacher named Martin Luther King Jr., during the most tumultuous days of the American civil rights movement. She married him in 1953.

After his assassination on April 4, 1968, keeping her focus on life instead of mourning his death, she immediately took to the streets for the Poor People's March in Memphis. While continuing to keep his dream alive, she also raised four children as a single mom, and worked to keep the ideology of equality for all people at the forefront of the nation's agenda. She goaded and pulled for more than a decade to have her husband's birthday observed as a national holiday, then watched with pride in 1983 as President Ronald Reagan signed the bill into law. The first federal holiday was celebrated in 1986.

She then went on to became a symbol, in her own right, of Dr. Martin Luther King's struggle for peace and brotherhood, presiding with a quiet, steady, stoic presence over countless seminars and conferences on global issues such as the Women's Movement, Aids Research, Children's Rights, and the list goes on and on.

And although we now mourn the passing of yet another great "people's" champion, we can also take comfort in knowing that hers, like her husband before her, was a life well worth celebrating.
Posted by H.G. Dowdell at 6:33 AM 1 comment: