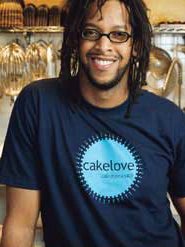 Guaranteed to plaster ten pounds on you by the "power of suggestion" whenever you tune in to watch his new show called, Sugar Rush on the Food Network Channel, four years ago, pastry chef Warren Brown walked away from a job as a federal litigator -- to bake cakes. It all started on New Year's 1999 when Brown, an able cook, resolved to become an expert baker as well. After work, he began to whip up cakes. He found that baking provided release from the workaday stress.

Soon, Brown fell into the habit of throwing dessert parties -- "Friends were jumping on the bed," they were so happy, he recalls. Their joy combined with his job dissatisfaction led Brown to take a leave of absence in 2000. He wanted to see if he could support himself as a baker. He subleased a small commercial kitchen and found customers mostly by word of mouth. This went well enough that he moved into a 600-square-foot storefront that he christened Cake Love. He funded the business with credit cards and then a $125,000 loan backed by the Small Business Administration. When Brown officially left his day job, Emily McCarthy, Brown's friend since college, says she wasn't shocked but did think it was brave.

Today, Cake Love sells around 40 cakes per day at about $55 each. The sweet-smelling bakery's walls are painted a warm yellow, and a huge picture window allows a view of the kitchen from the sidewalk, drawing in customers. The surrounding U Street corridor neighborhood is being rapidly gentrified, and the business seems to embody the vitality and style of the young new homeowners who are moving in. McCarthy believes Brown's background further helps the business because in D.C. it seems that almost everyone is a lawyer. "They can live vicariously through Warren when they go to the bakery," she explains.

And, my only hope is that the good people at Food Network will extend Brown's original 13-week Sugar Rush showcase so that it will be around -- for a lot longer. In each installment, Brown meets and trades secrets with award-winning pastry chefs, to discover the tips and tricks behind incredible desserts. From designer cookies to decadent truffles, four-foot tall cakes to flaming tableside treats, Sugar Rush showcases the most sinful, the most artistic, and the most theatrical desserts on the planet, complete with tips and recipes from Warren himself.

This one is definitely worth watching for all you sweet-treat lovers, so check your local TV listings for the exact times to tune in.

No doubt, it's a GREAT feeling to walk away from a lucrative career as Warren Brown did, in order to do something you truly love.

What an incredible story. Thanks for printing this.