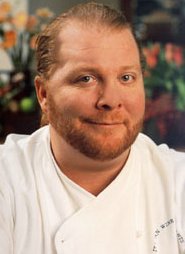 This might still be the year of the $500 omakase meals in the Time Warner Center, but it’s certainly also the year of the $2.50 Chicago-style hot dog, the $6 Philly cheese steak (for sure), and Astoria’s first $7 tarte flambée.

It all has to do with certain big name chefs and restaurateurs moving in a downwardly mobile direction. One of them, is renown Chef Mario Batali, who in recent years has been scooping gelato from a cart in Washington Square Park, along with Adam Perry Lang bringing his fleet of barbecue carts up to nine, and Tom Colicchio of Craft and Gramercy Tavern opening two new branches of his gourmet sandwich shop, ’Wichcraft.

It seems that in the most democratic of dining cities, even elite chefs love nothing better than a good deal. This was even confirmed when New York Magazine recently sent four of them out to spend the cost of their tasting menu or prix fixe on cheap food for a day. All four reportedly came back happy and full -- and under budget, as can any smart-spending diner these days. Therefore, the trends are now dictating that the general rule of thumb is simply to name your price.

By the way, taking a few minutes off from our Big Apple Conference here in NYC this weekend along with a few out-of-town writer friends, I got to sample a chocolate/peanut butter flavored gelato from Chef Batali's Washington Square Park pushcart mentioned above -- and I can tell you it's absolutely to die for! Also, clearly beating out the age-old "pushcart" fare that was once the world-famous "dirty water dog" more commonly known as the NYC hot dog.