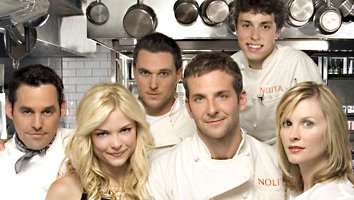 The cast of the new series on Fox

After making its debut last week on the Fox Network and based on renowned chef and novelist Anthony Bourdain’s best-selling autobiography Kitchen Confidential, I've been hearing some rather mixed buzz about this new show in Fox's fall lineup that exposes the secrets of the restaurant business through the story of a chef who’s determined to climb back to the top of the food game.

However, and putting aside the fact that I happen to be a die-hard fan and admirer of Bourdain's writing (especially his well-crafted novel-length fiction), as well as his extreme eating Travel Channel adventures to the remotest places you could ever think of for sampling the local "cuisine," I personally think this slightly Botoxed and bikini-waxed version of what really happens in a New York City restaurant kitchen, might just be a keeper after all...at least, for a while. In any event, we'll see. Check local listings for exact times for Kitchen Confidential on Fox Mondays.

Meanwhile, I would strongly recommend reading a copy of Bourdain's Kitchen Confidential: Adventures in the Culinary Underbelly for a truer sense of his autobiographical life as a New York Chef, as told in his own words.

Well, the weekend's finally here, gang. I promised the hubster that we'd jump in the car tomorrow and check out some of the early fall foliage just north of where live – so it looks like that'll be high on this weekend's to-do list. So wherever you might be, make it a good weekend as well -- and as always -- try to make it fun if you can. Hey, after all, life's short -- so why the hell not, right? Peace and enjoy.
Posted by H.G. Dowdell at 6:42 AM