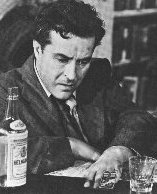 Well, okay...maybe not exactly the kind Ray Milland once had in a movie of the same name many years ago. But for me, it was definitely one of those weekends where the "best lain out plans" never seemed to pan out. Meaning, of course, that I didn't get one thing done that I had planned on getting done, and so it goes.

But then again, just when I thought that overall, this past weekend was a more or less uneventful one, i.e., a total bust by all accounts...the inimitable writers of HBO's hit series Six Feet Under go and kill off the character of Nate Fisher, a role that has been expertly played for the past four seasons by actor Peter Krause. (Shock, horror of horrors... had no idea whatsoever it was coming!) In any event though, I'll forgive the producers of this great series (which in my opinion ranks way up there as one of the best dark and sometimes ironically funny series dramas on television today)for not sending me the memo on this one. And no doubt, I'm now "dying" to see where the story leads from here, i.e., the aftermath of losing this very key character, the fate of his wife Brenda (pregnant and played beautifully by Australian actress Rachel Griffiths), etc., etc. Interesting stuff indeed nonetheless -- as well as capping off an otherwise dormant two-day period.