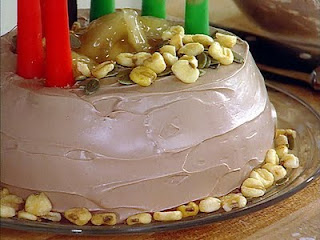 While admitting that I haven't seen the Chanaukah cake debacle that Food Network's host Sandra Lee got herself into, I will say that from the onset of the clip below, Lee hasn't got the foggiest clue for what she's doing in her infamous Kwanzaa Cake episode. The poor cake in the clip (not the one shown above, which is actually what the cake should look like) is truly a helpless pile of ridiculousness, slathered together in despair, then cluelessly showered with a downpour of nonsense nuggets.... Period.
However, Denise Vivaldo, who created the infamous Kwanzaa Cake recipe for Sandra Lee, confesses her sins in the Huffington Post, just before whisking herself out of the country on a trip to Thailand (and out of the range of mobs of angry black people carrying pitchforks, no doubt): "I can honestly say Ms. Lee had nothing against African Americans or Jews. She just has incredibly bad food taste." (Hmmm...I hear you, Denise.)
Anyhow, in the inimitable words of my favorite bad boy chef and curmudgeon, Anthony Bourdain: "The most terrifying thing I've seen is Sandra Lee making a Kwanzaa cake. Watch that clip and tell me your eyeballs don't burst into flames. It's a war crime on television. You'll scream. " (The bad boy nails it, once again.)

Okay, enough said. Watch the clip. Enjoy. And have a wonderful Holiday Season and a Happy and Prosperous New Year.

I hope you have a wonderful and relaxing holiday!

Thanks. Same to you and family, Bren.

Goodness! Just viewed the Kwanzaa cake video--would not eat that with somebody else's mouth!
Georgie, wishing you a wonderful new year! d:)