For The Food History Buff In All Of Us 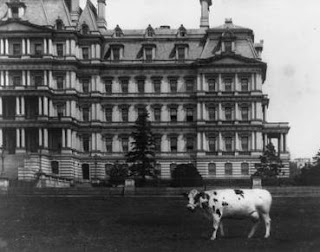 Mooley, the Taft White House Cow(or is it Pauline, the replacement cow? Mooley died in 1910)

Historical food facts are a beautiful thing. Take for instance, President William Howard Taft, and the cow(s) he was said to have owned, and actually let graze on the White House lawn. (What a fun time tour guides must have had back then -- warning tourists to watch out for the "cow pies.")

And yes, I really have often wondered about certain presidential food facts, such as the Baby Ruth candy bar and its alleged connection to Grover Cleveland's infant daughter, Ruth, and what some of out nation's presidents may or may not have like to see on their breakfast plates.

And what about President James Madison's wife, Dolly, and her apparent "discovery" of America's favorite junk food, ice cream? Did you know:

Legend has it that in the nineteenth century, a freed slave named Sallie Shadd went into her family’s catering business in Wilmington, Delaware. Sallie achieved fame among the free black population for a new dessert sensation she created with frozen cream, sugar, and fruit. When Dolly Madison heard about this new dessert, she supposedly travelled to Wilmington to try it. Mrs. Madison must have loved it because a “magnificent pink dome of ice cream” was served at President Madison’s second Inaugural Ball in 1813, and ice cream often appeared as the official dessert on the White House menu.

So if you're both a historical buff as well as a consummate foodie (like me), please take a look at this wonderful blog by Suzy Evans, Ph. D. called, The History Chef.

So ... did Sallie get compensation and recognition for her delicious invention?

Sadly, most likely not, Lynn. But it's great that at least she's getting some "posthumous" recognition for it.

Thanks for the kind words!! :) Suzy