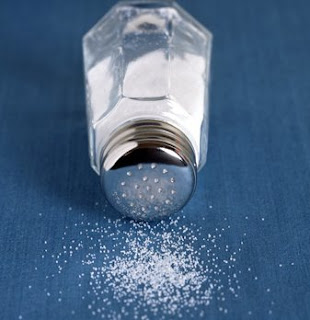 Question: Would you go out to eat at a restaurant where the use of salt has been completely banned? And we're not just talking on your table -- but by the chefs in the kitchen as well?

Well, if NY State Assemblyman Felix Ortiz has his way, the only salt added to your meal will come from the chef's salty tears.

The Brooklyn Democrat has introduced a bill that would ban the use of salt in New York restaurants - and violators would be smacked with a $1,000 fine for every salty dish. (Okay, first the recently proposed tax on sodas with sugar in them, and now this. Um…can you say, just another way of the state sticking its gnarly little finger into the public's pockets? )

"No owner or operator of a restaurant in this state shall use salt in any form in the preparation of any food," the new bill reads. Hmmmm…

Anyway, and just in time in my opinion, some of Manhattan's top cooks have already started to blast the idea, saying the legislation lacks a certain hint of something.

"New York City is considered the restaurant capital of the world. If they banned salt, nobody would come here anymore," said Tom Colicchio, star of Top Chef and owner of Craft. "Anybody who wants to taste food with no salt, go to a hospital and taste that," he said.

Couldn't agree more, Chef Colicchio. Being health-conscious is indeed a conscious decision that patrons should decide -- for themselves. Thank you.

Mr. Ortiz needs to find something else to do with his time and stay out of our lives.