Fat Man In A White Hat 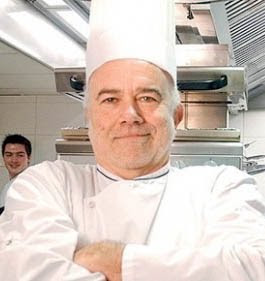 You'd have to agree that Bill Buford is interesting, in addition to being somewhat of an acquired taste for most people. Clearly, the New Yorker writer and former editor of Granta is said to fashion himself after Clive James, repeating words and phrases in dulcet tones for mesmerizing effects. But with his arms flailing like the blades on a high speed blender, enthusiasm certainly appears to be his intended goal.
So I'm guessing that's why the BBC has dubbed its latest foodie program as a Fat Man in a White Hat, albeit to mixed reviews (some good, others, well…not so good).
Some years ago, Buford started getting really interested in food. Really. So, he took a sabbatical from his day job and wrote a book (in the hallowed tradition of Anthony Bordain and Kitchen Confidential) called Heat about Babbo, an Italian restaurant in New York, where he worked for free in order to learn the ways of its celebrated chef, Mario Batali. He also visited some of the kitchens in Italy where Batali had his most formative experiences.
He then set out for France, the land of "the sauce." Basically, he was on the same experimental mission, only this time with lots more heavy cream and butter.
In any case, there are video clips at the program's official website, but, unfortunately, you can't view them if you are not in the UK. (Gee, thanks.) However, The Independent is slightly more upbeat in its review, but not with a few reservations.
Will talk more about the Fat Man here though, once I can get a glipse at a video clip that all of us Americans can watch.
Posted by H.G. Dowdell at 1:43 PM