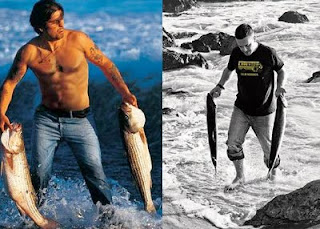 Over at the Food Section blog, is a post about the irony of the new cookbook from "Top Chef" alum Fabio Viviani, and the likeness of the book's images to a photo from another chef cookbook.

The above image of Ludovic Lefebvre (left) from his cookbook Crave is strikingly similar to that of Viviani (right) in his new book: hunky bad boy chef dude trampling through the waters with rock-solid abs and rolled up jeans -- seemingly snatching two giant fish from the water with nothing but bare hands.

But back in 2005, staff writer, Leslie Brenner, went fairly giddy and ga-ga over the photo of Lefebvre on the pages of the Los Angeles Times: "Look at him, emerging from the surf like a chef-Adonis, kelp fairly dangling from his biceps. He caught those big fish with his bare hands!"

(But honest, folks...she really did hold on to that edition of the LA Times Food Section all these years for the recipes. Honest, she really, really did.)

In any case, hot bods, badassed tattoos, and bare-handed fishing...oh, my!

Which truly begs the question: At this rate, who needs fishing poles?