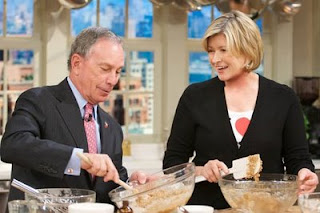 Straight from the "The Martha Stewart Show" are these sound bites from Mayor Michael Bloomberg's appearance this past week on the daytime television show.

In addition to showing off his cookie-baking skills, the Mayor expounded upon his gastromantic techniques:

MS: When people ask you about New York City, what are the three things…that are absolutely important for out-of-towners to do, to see, to visit?

MB: Well, number one, I would take the Staten Island Ferry over to Staten Island – get off. There are lots of cultural things on Staten Island, but even if you don’t have time to do that, take it over and back. It’s free and you get a phenomenal view of the Statue of Liberty and Ellis Island and the skyline of Brooklyn and Manhattan.

MS: You don’t know this, but do you know what happened to me on the Staten Island Ferry?

MS: I got engaged.

MB: Mazal tov! I wont asked what happened after that.

MS: Well that’s history, but it was very exciting and the view is very nice.

MB: I used to buy a six pack of beer and a pizza and take a date…it was very romantic and something I could do. The second thing I would do is go to a Greek diner. Greek diners are something that is unique to New York. There’s a thousands things on the menu; they all cost about five bucks; they come in 30 seconds; and they all taste good. If I was going to eat every meal for the rest of my life in one restaurant, it would be a Greek diner…and then I guess the last thing I would do…Broadway show.

I wonder how many New Yorkers haven't done those three things?