Throwing Out The Junk 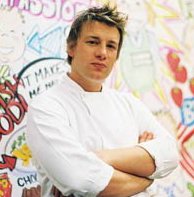 Considered miles ahead of his chef counterparts here in the U.S., famed British chef and cookbook author Jamie Oliver has been on a nationwide campaign on the other side of the pond to ban junk foods served in schools, and get kids eating tasty, nutritious food instead. As a result, a revolution of sorts has been initiated in schools to prove that school meals can, in fact, be better.

The new guidelines on meals follows Jamie's Feed Me Better campaign, which debuted in 2005, and his popular TV show, Jamie's School Dinners on the UK's Channel 4.

"It’s all about making radical changes to the school meals system and challenging the junk food culture by showing schools they can serve fresh nutritious meals that kids enjoy eating. What we eat affects everything: our mood, behavior, health, growth, even our ability to concentrate. A lunchtime school meal should provide a growing child with one third of their daily nutritional intake."

A healthy existence (and future) for the world's future adults -- can't be bad at all, Jamie.