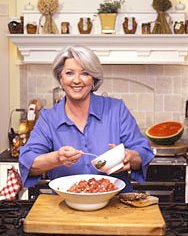 As expected, the barbs are already flying, and since there are so many changes at Food Network these days, including Rachael Ray devoting more time to her brand new talk show and the decision to cancel chef Mario Bateli's Molto Mario, the channel is said to be attracting younger viewers and challenging competitors by introducing "Paula's Party," starring America's favorite country cook and down-home Southern belle, Paula Deen. Unfortunately, this new talk show idea is now being panned as "more Romper Room than Cooking With Master Chefs," according to this recent article in the Fort Wayne Journal Gazette .

However, also on Deen's busy plate these days is a new cookbook titled Paula Deen Celebrates which debuts on Oct. 1, along with the penning of her memoirs, to be later published in April 2007 by Simon & Schuster. This comes in addition to marketing her own line of food products, but so far, there have been very few details on that.

But the question still remains: Can this mature Southern grandma really dish with the younger generation about sexy footwear (as she did during an episode taping) while officiating crab races (which she also did during an episode taping), interviewing booty shaking rap video divas, recommending where to get the best deals on the latest iPods and skateboards, etc., etc.? (Okay, okay...that may be stretching it a little.) No doubt, we'll soon see.

And just for the record, my money's totally on Paula -- for being just the right person to pull this off.
Posted by H.G. Dowdell at 9:37 AM