Back On The Book Scene

It's been three years since his first book titled Aquavit: And the New Scandinavian Cuisine hit the bookshelves, and now, Marcus Samuelsson is back this month with a new one titled The Soul Of A New Cuisine: A Discovery Of The Foods And Flavors Of Africa.

Born in Ethiopia, adopted by Swedish parents, and raised in Sweden, Marcus Samuelsson became the executive chef at Aquavit, a well-known Swedish restaurant here in NYC, at the tender age of twenty-four. Since then, he has continued to exhibit a natural and unique perspective on all facets of fine cuisine -- from international cooking to classic baking.

The Soul Of A New Cuisine is scheduled to be in bookstores on the 24th of this month. Don't miss it. Guaranteed, I won't.

Chef Samuelsson will also be one of several participating chefs at the Gourmet Institute on October 20th through October 22nd, for a behind-the-scenes look into the world of Gourmet Magazine(their eight test kitchens and photo studios)at their headquarters, located at 4 Times Square here in New York City. Read more here about this special weekend-long event, and how to purchase tickets. 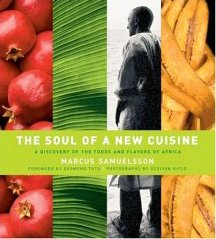