The Taming Of The Anti-Cook

A friend and I had a discussion yesterday that reminded me of something. It's an otherwise sad (well, in some opinions, anyway) but nevertheless truthful commentary that there are in fact some people who * do not * love to cook.

This conversation also brought to mind one of my favorite cookbooks, and I don't mind admitting, one of the first cookbooks I ever bought in my younger, non-cooking-because-I- really-didn't-have-to days when it was first released titled the I Hate To Cook Book by Peg Bracken. However, on my cookbook shelf these days, remains a follow-up to this classic book titled, The "Compleat" I Hate To Cook Book, which is just as much of a true winner, as its predecessor. 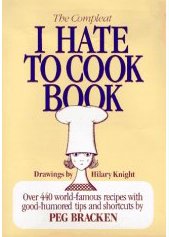 If you really would rather hunt for a meal -- than cook it, and approach a food processor or blender the same way you would a guillotine (or a weed-whacker), Bracken has got some totally easy-to-follow recipes and sharp, insightful anecdotes that would make the staunchest of kitchen haters stand up and take notice.

Peg Bracken is also the author of several other related books of good humor and helpful hints that are, unfortunately, no longer in print. And, I can only say that I wish they still were.

Thanks again, Peg. From the days of that "younger" me, that surprisingly still lives deep down inside there somewhere.
Posted by H.G. Dowdell at 6:10 AM