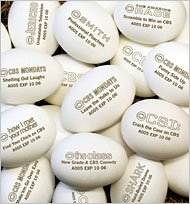 Far and away from the modern-day sale of advertising space on everything from receding hairlines to pregnant bellies on Ebay -- I've got to admit that I found it quite an advertising stroke of genius when I first saw this on the side of a container of Moo Shu Pork from a local Chinese take out. And now, the CBS TV Network has also decided to take up the mantle in this recent phenomenon in advertising.

The network will be placing laser imprints for TV show ads on our morning eggs -- 35 million of them -- in the months of September and October. CBS’s copywriters are referring to the medium as “egg-vertising,” hinting at the wordplay they have in store. Some of their planned slogans: “CSI” (“Crack the Case on CBS”); “The Amazing Race” (“Scramble to Win on CBS”); and “Shark” (“Hard-Boiled Drama.”). Variations on the ad for its Monday night lineup of comedy shows include “Shelling Out Laughs,” “Funny Side Up” and “Leave the Yolks to Us.”

Egg-static, egg-citing… heck, I've just about run out of adjectives and cutesy catchalls for this new marketing wave. So I'll just let you guys read more here on this new CBS move.

Eggs-hilarating stuff for my morning glass of fresh-squeezed orange juice -- to say the very least.