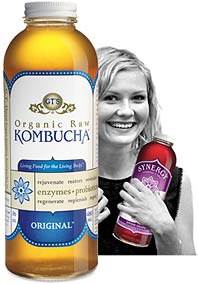 Kirsten Dunst and the latest in organic thirst-quenchers

I actually caught a glimpse of the recent episode of HBO's Entourage, where a director was house-sitting for his girlfriend’s parents in a mansion they bought with a Kombucha fortune. And just what is Kombucha, you ask? Well, it's said to smell a bit like a rank pile of fertilizer. But then again, it also promises to restore your digestion, liver function and cell integrity -- in addition to claims of helping to burn up your nasty old body fat. In other words, it's supposedly: Good for what ails you.

The organic, bottled Chinese tea (pronounced kom-BOO-cha) is cultured for 30 days to produce its "active enzymes" and "antioxidants." It’s also got authentic, albeit odd-looking strands of something green floating around in it. In either case, I'm almost sure that if you've ever smelled the ripened fruit of a female Chinese ginkgo tree, this stuff might just be a smelly close second. Still, on the West coast it appears to the A-listers' big beverage of choice these days, according to this month's New York Magazine.

Hey, Andy Dick drinks it everyday, and Kirsten Dunst looks mighty happy holding a bottle of G.T. Dave's Synergy in the photo above. So, um... need anyone say anymore?? By the way, this new Kombucha trend has also made its way to the East coast, and said to be flying off the shelves over at the Fairway Market here in the NYC area.

And that about wraps it up for me here this week. Make it a great weekend, all. Peace.
Posted by H.G. Dowdell at 6:25 AM