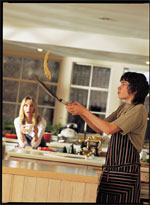 Making an impressive (actually, I think he's downright adorable!) U.S. appearance this past week on NBC's Today Show, there's no doubt the latest young culinary whiz on the other side of the pond is 15-year-old Sam Stern from Yorkshire, England. His new book is aptly titled Cooking Up A Storm: The Teen Survival Cookbook, and along with receiving rave notices, I guess you could probably say it's a book after a mother's own heart -- simply because it inspires teens to explore the joys of cooking their own food, for a change. Man, where was this book a few years ago -- when I needed it?

Anyway, dubbed the new Jamie Oliver after the famed British chef and cookbook author of the same name, and inspired by British culinary names like Nigella Lawson and Gordon Ramsay, Sam's book offers pancakes for breakfast and easy lunches like soups or salads to pack up for school. Quick meals like spaghetti or omelets for busy school nights; and for weekends more serious dinners like homemade lasagna or whole roasted chicken. And let's not forget his fancy, mouth-watering desserts. It's a book basically geared toward teens, and even offers a few chapters on how to "impress girls" for all those young teen males who might decide they really wouldn't mind this particular... approach. 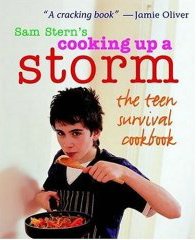 Read more about this new young culinary dynamo along with a Q & A here.
Posted by H.G. Dowdell at 6:24 AM