Caught Up In The Crisis 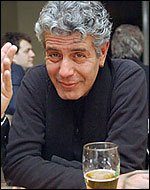 The Travel Channel has been airing a promo for Monday, August 21st in which world traveling chef, author, and TV host Anthony Bourdain will share more of his recent experiences in battle torn Beirut. As reported, Bourdain and the film crew of his Travel Channel show No Reservations were caught inside Beirut while filming an NR episode when the fighting erupted between Hezbollah and the Israeli Defense Forces.

Bourdain later told the New York Post, among other things, that he just wanted to have a drink at the bar. "The mojitos here are great," he said. But as expected, this comment managed to rub a few people the wrong way, and generated lots of posts at the eGullet website and the No Reservations message boards.

In response, however, Bourdain has apparently posted his further thoughts on the situation. He writes at eGullet: "I’m very aware of how flip my response to the Post was (made very early in the crisis) as I sought to reassure family and friends that we were safe and okay and in good cheer. It was--at the time--very representative of the (outward) attitude of the people of Beirut, who pride themselves on their resilience and their determination to ‘keep the party going.’"

"It is indeed heartbreaking and horrifying what has happened to this lovely country--to spanking new, lovingly restored, resurgent Beirut in particular, in only a few days of sustained and seemingly senseless destruction. A few days ago, this was a place where people were bursting with pride for the relative tolerance, progressive attitudes, and lack of conflict between groups. I was standing with a group: a Sunni, a Christian, and a Shiite--by the Hariri memorial when the gunfire started and the Hezbollah people appeared driving through city center and honking their horns in 'celebration' for the capture/kidnappings. The look of dismay and embarrassment on all three faces...and the grim look of resignation as they all-- instantly-- recognized what would inevitably come next...is something I will never forget."

And certainly above all -- glad to hear that you and all those traveling with you were rescued to safety, Tony.