Cadaver Chic Is Out…Chunky Is Back 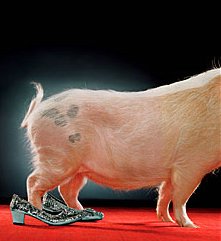 Of silk purses, and sows' ears?

For all of you guys and girls who jumped the bandwagon with Kirstie Alley on her Jenny Craig weight loss odyssey a few months back -- take heart. According to all the latest reliable trend sources, a little more meat on the bone is all the rage these days, and what was once considered chunky is now quite...trendy.

Holly Millea breaks it all down even further in this month's Details Magazine :

"The curve," Mae West observed, "is more powerful than the sword." Measuring 38-24-38, the five-foot-one sex goddess spoke from experience—lots of it. West’s bodacious successors—women like Catherine Zeta-Jones, Drew Barrymore, Rachel Weisz, and Kate Winslet, who hold fast to their cushioned curves even as their peers downsize more aggressively than General Motors—understand that maxim. Their faminista sisters do not. Now, the bigger-(relatively speaking)-is-better argument could easily be made with logic. But a growing faction of actresses who appear to have a healthy relationship with carbohydrates are making the point better than any polemicizing ever could. Simply line Hollywood’s wispy players up next to the lush likes of Scarlett Johansson, Lost siren Evangeline Lilly, Liv Tyler, Big Love star Ginnifer Goodwin, and an increasingly curvy Mandy Moore (gosh, is she really considered to be on the "Ruebenesque" side of things these days, too??)

Anyway, if you're interested in reading more, pick up that container of Ben & Jerry's "Cherry Garcia" instead of putting it down -- and read more here, along with a visual smorgasbord of the "sexiest plate-scrapers" ever.

Love this blog! I was just thinking along these lines the other day while watching one of my favorite old movies, The Quiet Man, with Maureen O'Hara and John Wayne. Ms. O'Hara would have been considered chubby by modern standards, but at the time, she had the figure every woman dreamed of. And how about Marilyn Monroe in Some Like It Hot? It makes one wonder: How did ultra-thin ever come to be so "in?"