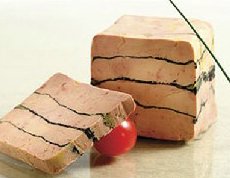 According to Forbes.com it seems Japan has just lifted its ban on French poultry brought on by global concerns of bird flu. In addition, Japan will now resume its sales of foie gras, the much maligned goose and duck liver delicacy that has animal activists here in the U.S. in such an uproar it has prompted many cities to impose their own bans on its overall sale in the food industry.

Japan is reported to be the fourth largest importer of French foie gras after Spain, Switzerland and Belgium, buying nearly 400 tons last year. So it looks like soon, American foie gras lovers will have to add on a plane ride across the seas -- for a taste of this pricey dish.

And with no resolution in sight, foie gras, which involves the force-feeding of ducks and geese, has no doubt become the "fur" of the new millennium. And like its predecessor back in the 1980s and 90s, the burning question still might be: "Do we really need foie gras (or, garments made out of the hides of cute little furry animals for that matter) -- in order to live?" And of course, the answer would be: Probably not.

But then again, the next question to follow would surely be: "Do I personally want to find myself on the wrong side of this fiery debate??" And most definitely the answer would be... Not a chance.

I will say, however, that with activists having already used tactics such as destroying private property and making threats of violence toward foie gras purveyors as well as chefs and their families is as always -- a bit over the top. These kinds of tactics should also come to a full STOP immediately, if not sooner. You can read more about this, as well as other aspects involving the ongoing flap over these forbidden poultry innards here.