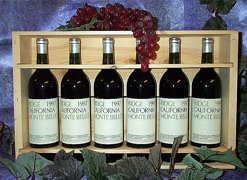 After 30 years a few venerable Californian wines have once again beaten their French counterparts in a re-run of the Paris Tasting of 1976, according to the latest report at Decanter.com.

Against all expectations (and odds) the Cabernets – Ridge Monte Bello 1971, Stag's Leap Wine Cellars 1973, Mayacamas 71, Heitz 70 and Clos du Val 72 – were voted superior to their rivals in Bordeaux.

In last week's notable series of coordinated tastings in London and California, hosted by Steven Spurrier, some of the world's most eminent tasters found the Californian wines to have retained more of their verve over the years than the Bordeaux. The tasting was an exact rerun – with the same wines – of the Paris Tasting of 24 May 1976, in which Stag's Leap and Ridge were voted superior to the French wines by a panel of eminent French critics.

Good Wednesday, all. Peace
Posted by H.G. Dowdell at 6:31 AM