A Page From Tom's Book

Duck! This Sunday (Mother's Day for all you kiddies -- who up until now have let it slip your minds) I'll be making a braised duck recipe, also employing the inspiration of Top Chef judge, Tom Colicchio's book Craft of Cooking: Notes and Recipes from a Restaurant Kitchen. His previous cookbook offering titled Think Like A Chef which I'm sorry to say I've never gotten around to owning has also garnered some rave reviews. But using Craft, we'll see how it turns out on Sunday, Madeira wine -- and all. 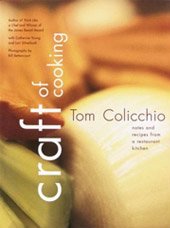 By the way, Chef Colicchio owns several restaurants nationwide, but my favorite is also the one called Craft here in New York City on East 19th St. The menu and the food are, in a word, excellent.

Gotta run, so that's it for me here this week. And to mothers everywhere, have yourselves a great weekend and a super Sunday! Peace
Posted by H.G. Dowdell at 6:36 AM