This Week's "Slowdown" On NBC 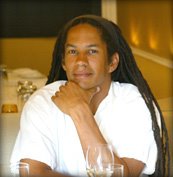 I've been tuning in this week to the much-touted Celebrity Cooking Showdown , with a bit of disappointment after each segment, I'm sorry to say. And throughout these airings, I can't help thinking: It was an interesting idea to begin with (or, at least as interesting as reality TV can be these days), but hey, Sean "P. Diddy" Combs and the other producers who are backing this program -- what's up?? Clearly, to pin the term "lackluster" on this one, would be somewhat of a definitive stretch, to say the very least.

Still, it's great to see Govind Armstrong on board, as my last time seeing him was during his Iron Chef battle against Bobby Flay last year.

A protege of Wolfgang Puck, starting at the tender age 13, these days Armstrong keeps himself busy, traveling the world as a consultant chef to Air New Zealand, a member of the Marshall Fields/Macy's culinary advisory board, guest chef aboard the Queen Mary 2 and Crystal Cruises and as a culinary ambassador to New Zealand. Additionally, he's been making a wide range of media appearances from print (People Magazine's 50 Most Beautiful Issue, Bon Appetit, Gourmet, O Magazine, etc.) to television (Iron Chef America/Food Network, The Today Show/NBC, Great Domestic Showdown/ABC, Extra, Bravo, Style Network, Fine Living, WE, etc.).

Armstrong also keeps busy by serving as partner and executive chef of Table 8 in Los Angeles. Up next for Armstrong are a variety of restaurant projects, including the June opening of Table 8 South Beach as well as openings of Table 8's in San Francisco, New York and Las Vegas respectively.

By the way, he's also just finished his first book to be released by Clarkson Potter/Crown in early 2007.

As for Celebrity Cooking Showdown...well, I guess I'll just have to stay tuned. Perhaps tonight will be the dynamic turnaround for this show, who knows? I sure hope so.