Easter Confections: By The Numbers 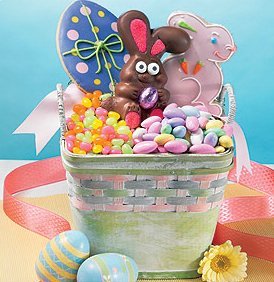 And what would Easter be without a few "trivia" facts about the holiday from those who probably know just about everything there is to know about it? Well, according to the The National Confectioners Association the stats and facts are as follows (aw, hush up...you know you're just dying to know this stuff):

· The first chocolate eggs were made in Europe in the early 19th century and remain among the most popular treats associated with Easter.
· 90 million chocolate Easter bunnies are made for Easter each year.
· 16 billion jelly beans are made for Easter.
· Each day, five million marshmallow chicks and bunnies are produced in preparation for Easter.
· Easter is the second top-selling confectionery holiday behind only Halloween.
· 88 percent of adults carry on the Easter tradition of creating Easter baskets for their kids.
· 76 percent of people eat the ears on chocolate bunnies first.
· Red jelly beans are kids' favorite.
· According to the Guinness Book of World Records the largest Easter egg ever made was just over 25-ft high and made of chocolate and marshmallow. The egg weighed 8,968 lbs. and was supported by an internal steel frame.

And keeping in the spirit of things, I've already ordered and sent my offerings, overflowing with Ghirardelli chocolates, marshmallow peeps, and jelly bean goodness, to a handful of the * special * people in my life from Wine Country Gift Baskets

I also don't mind giving them a quick mention here, as I've ordered from them before, and needless to say their festively arranged products and services are clearly worth it. So even if you're a little late with an Easter order, don't sweat it. Order something anyway, either from them -- or from wherever you chose. These items make terrific spring gifts, even if they do manage to show up a few days later.

After all, it's really about showing your love for those who occupy the * special * places in your life, and nothing else.

Have a fantastic Easter weekend, gang! Peace.
Posted by H.G. Dowdell at 7:09 AM