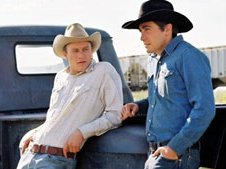 It appears that a Utah movie theater abruptly changed its screening plans recently and decided not to show the film Brokeback Mountain starring Heath Ledger and Jake Gyllenhaal pictured above. The film, an R-rated Western gay romance story, was supposed to open Friday at the Megaplex at Jordan Commons in Sandy, a suburb of Salt Lake City. Instead, it was pulled from the schedule. By the way, as also mentioned, the manager of the Jordan Commons Megaplex, coincidentally declined comment.

Now um...wait a minute. What's this, you ask? Shades of the 1960s hit movie Guess Who's Coming To Dinner starring Sidney Poitier, Kate Hepburn, and Spencer Tracy, perhaps? Referring, of course, to those of us old enough to remember this particular movie, and the similar "Eek! Oh, my God!" factor it generated which led to its banning in more than a dozen movie houses throughout the south. In any event, for my money, it certainly has all the telltale *earmarks* of it, hands down.

And, after pausing once again to check my calendar and making doubly sure that we are indeed now living in the year 2006 (yep, that's clearly what it says all right on the America The Beautiful calendar hanging here just above my desk), all I'll say is that censorship -- regardless of who feels what about whatever and not withstanding all the "I can ban whatever I want in my movie theater" ideologies of the world -- still sucks as much WIND in 2006 as it did in 1966.