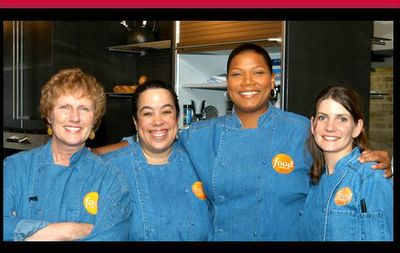 Queen Latifah and staffers from the Food Network Channel

Since reading her autobiography a few years ago titled Ladies First: Revelations of a Strong Woman Dana Owens from Newark, New Jersey, better known as Queen Latifah, a rising star with a keenly savvy business sense, fully captured my attention.

And today in the year 2006, long after parlaying her successful rap music career into a much broader "cinematic" scope, Queen Latifah's latest comedy Last Holiday was no doubt well received at its first public screening. This, in addition to the fact that I saw it for myself on Saturday -- and thought it was great. Still, the success of the film doesn't keep the star from feeling a bit saddened. That's because part of the movie was shot in New Orleans shortly before Hurricane Katrina. Seeing the locations again reminded her that many of those places no longer exist.

"I hope people seeing this film realize how much we need that city," she said recently. "The music is so rich. The food is so rich. I hope they can rebuild it."

Latifah plays a shy cookware salesperson who in the privacy of her own kitchen slices, dices and spices with the expertise of a master chef. And it certainly isn't any wonder -- as she was trained for the role by celebrity chef and New Orleans restaurateur Emeril Lagasse.

As a side note: Not so surprisingly, Emeril's own Food Network Channel also wanted in. Therefore, after weeks of menu planning and research, members of the Food Network Kitchens flew to New Orleans to teach Queen Latifah the basics for portraying her character.

And that's about all I'm giving away here, so for more you'll just have to catch the "queen at work" for yourself in Last Holiday... at a theater near you.

By the way, I totally loved actor Gérard Depardieu, who, as "Chef Didier" gave a very convincing performance in this movie. Then again, this might be because Depardieu actually owns two restaurants in Paris, one of which, La Fontaine Gaillon is rather well-known.

I like Queen Latifah and am happy about her success; her new movie looks charming. I plan to see it. d:)