Farris After A Few Days Off 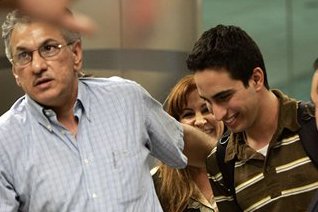 Farris Hassan being escorted at Miami International Airport on Sunday

It's called immersion journalism in which a writer lives the life of the subject, along with the intended purpose of understanding his or her subject matter better. It has even been attempted several times by (cough, cough...*ahem*) yours truly...which is a whole 'nuther blog posting in itself.

In any case, 16-year-old Farris Hassan, recently dubbed the Ferris Bueller of 2005, returned home Sunday night to a throng of reporters and camera crews after he was able to secure an entry visa for a trip to see things for himself first-hand in Iraq.

Farris took his U.S. passport and $1,800 in cash when he left, but didn't tell his family who are Iraqi citizens now living in the US, what he was doing until he arrived in Kuwait. And needless to say, with over forty American citizens having been kidnapped since the war started in March 2003, of whom 10 have already been killed, he was a welcomed sight to his parents upon his return to Miami International Airport on Sunday. Making this caper a solid entry for the "Don't Try This Craziness Yourselves, Kids" file for the teen years.

And with his "days off" to Baghdad now behind him, Farris Hassan will be rejoining his classmates at the Pine Crest School in Florida today -- for a calculus exam.

But hey, if he chooses to pursue it, what a hell of a journalist this ballsy young adventurer is going to make...one of these days.