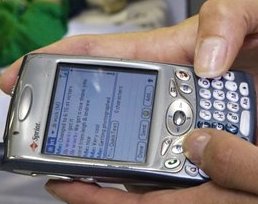 The BlackBerry, which debuted in 1999, employs a full QWERTY keypad for thumb typing to automatically send and receive e-mail. About 2.5 million people currently use Blackberries, more than double from a year ago. Now, it's been reported that repetitive motion injuries similar to carpal tunnel syndrome which has long afflicted desktop computer and laptop users, are invading the mobile handheld world. So much so, that there's even an informal name for this new condition called BlackBerry Thumb - a catch-all phrase that describes a repetitive stress injury of the thumb as a result of overusing small gadget keypads.

Business executives and tech-savvy consumers are increasingly using BlackBerries, Treos, Sidekicks and other devices with miniature keyboards designed for thumb-tapping to stay connected while on the go. And that has some ergonomic and hand experts worried about injuries from overexertion. However, there are some experts who feel it can easily be avoided, and with the exception of attempting to type 'War and Peace' with your thumbs, you should really have no problem.

Still, there are no national statistics exist on how many people suffer from this type of thumb ailment, but some doctors say they are in fact seeing an upswing in related cases, according to Dr. Stuart Hirsch, an orthopedist at St. Joseph's Hospital and Medical Center in Paterson, N.J. "It's mostly the road warrior who prefers to answer e-mails on a thumb keyboard," said Hirsch. "However, if all you did was employ a simple 'yes' and 'no' answer, it wouldn't be a dilemma."

Oh, the woes of modern technology, eh? In any event though, instead of completely "thumbing my nose" at this new warning, as the mother of an adult son who happens to be a die-hard BlackBerry user, I'll be sure to pass the info along.

And that'll just about wrap things up here for me this week, gang. Don't forget to come see us at the IWWG Big Apple Writers Conference and Workshops at the Scandinavia House, 58 Park Ave. (at 38th St) here in NYC tomorrow and Sunday if you happen to be in the area. Otherwise, have a great weekend wherever it is you happen to be. Peace.
Posted by H.G. Dowdell at 7:05 AM