His Writing Lives On In A New Feature Film 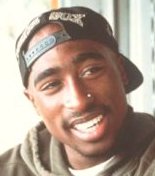 A screenplay written by slain rapper Tupac Shakur is being produced as a feature film "Live 2 Tell," a script Shakur wrote in 1995 about an inner-city black youth, was acquired by Insomnia Media Group, which plans to begin production next March. Insomnia acquired the rights from Tupac's mother, Afeni Shakur, who will be a producer on the film.

And, in addition to a documentary of home movies narrated by the slain rapper that is currently being shown on TMC(The Movie Channel) cable network, I think this will be yet another opportunity to get a closer glimpse of this young man who was gunned down in Las Vegas in 1996 -- through his own words. And, let us also not forget what an exceptional acting talent Shakur was, as exemplified in the movies he made during his career. Often overshadowed by his mega Rap persona, few people know that Shakur had also received formal training as an actor.

Make it a good Wednesday, all. The weekend's not too far away. Peace.
Posted by H.G. Dowdell at 8:25 AM