As The World Watches 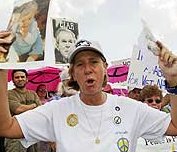 With rising sentiments now leaning toward a pullout of U.S. troops in Iraq, certainly Cindy Sheehan, the California mother of Cpl. Casey Sheehan has the world's media at her feet regarding her continued protest vigil outside President George W. Bush's Crawford, Texas ranch. Ms. Sheehan, 48, didn't get to see Bush, but did talk about 45 minutes with national security adviser Steve Hadley and deputy White House chief of staff Joe Hagin, who went out to hear her concerns. Appreciative of their attention, yet undaunted, Sheehan said she planned to continue her roadside vigil, except for a few breaks, until she gets to talk to Bush. Her son, Casey, was killed in Sadr City, Iraq, on April 4, 2004. He was an army specialist, a Humvee mechanic. And, with more and more military families arriving at the president's vacation retreat in Crawford (those both for and against Sheehan's protest), while the president himself issued a statement yesterday in which he sympathizes with the families of troops killed in Iraq, but feels a pullout at this time would not be prudent, this will continue to be an *interesting* development to watch.

Well, the weekend is here again, gang. Which for me, translates into lots of writing, editing, and the usual that will pretty much keep my rear attached to the chair and my fingers on the keyboard in order to get it all done. But then again, when writing is what you do, then, uh…well...I'm sure you get the picture.

Have a great late summer weekend at whatever it is you'll be doing in your own neck of the woods. Peace.
Posted by H.G. Dowdell at 8:34 AM